While picking up trees for a client I saw a neglected semi-dying redwood tree on the end of a row. I asked about a discount on the tree for the condition it was in. They responded by letting me know that it was going to be thrown away and that I could take it for free. 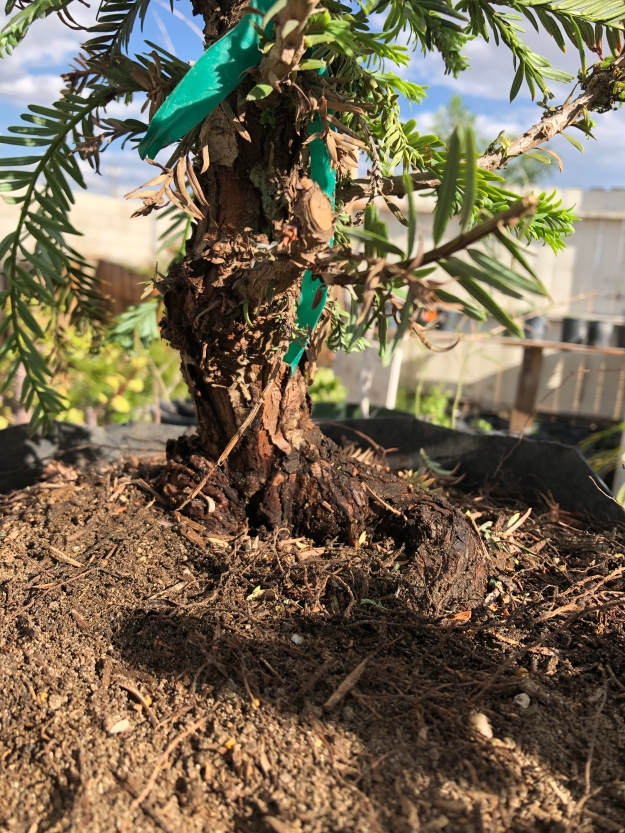 I couldn’t see much of the base as it was buried inside the container, but once I cut down the sides I was pleased with the interesting base it provided. 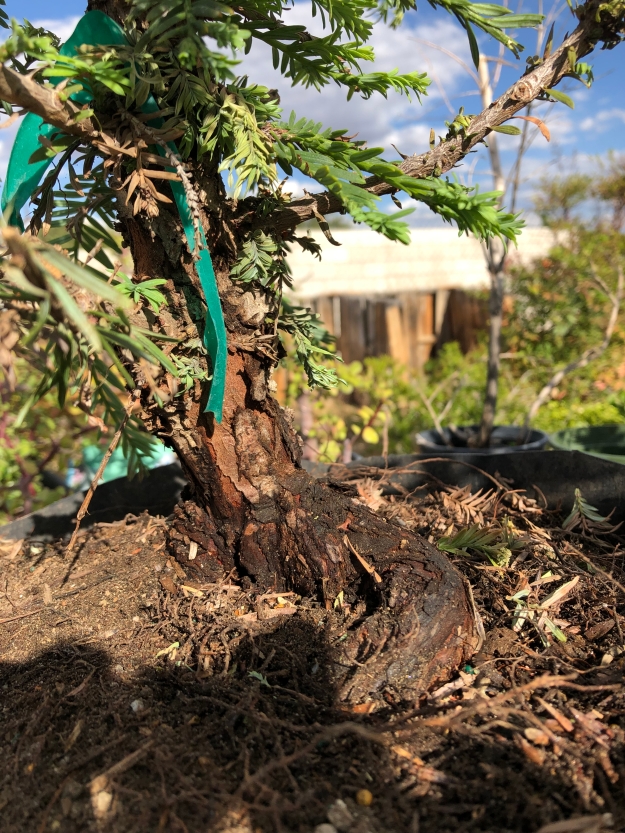 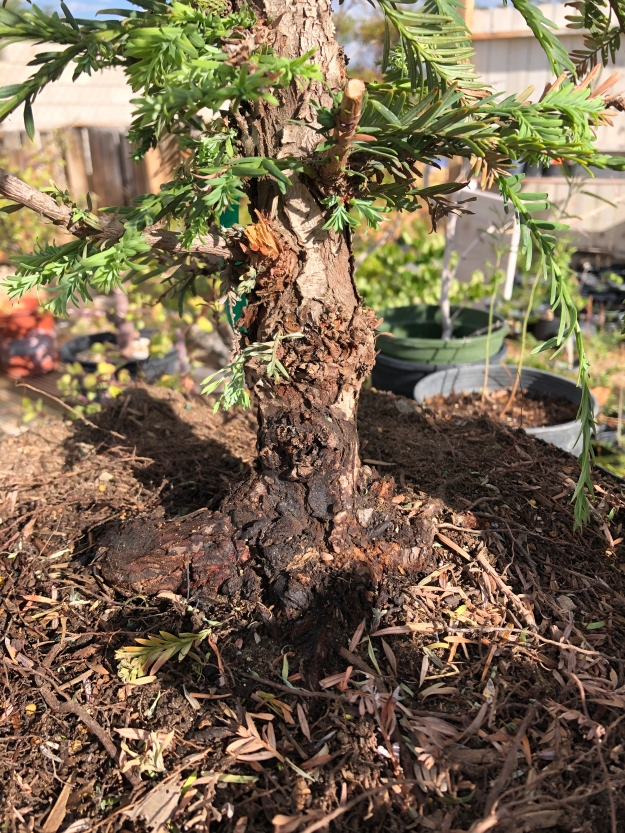 Reverse taper, yes. Nonetheless this is something that can be a fun project from here on out for free. Here are a few more photos of it: 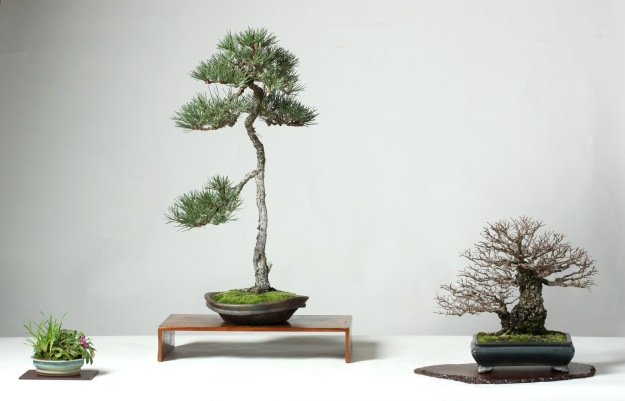 The trees flow well from the main tree to the sides by placing both the Elm and the companion plant in a direction that the foliage and branching suggest. The stands are also perfectly chosen to contrast the tree on top.

The literati styled Pine has a great defining branch on the left that sets the longest part of the tree. This helps it accomplish asymmetry rather than the unrealistic perfect symmetry. The trunk doesn’t have any outrageous bends, but has consistent movement which fits nicely with the literati style.

The Elm has good branching, but the taper from the thick trunk to the smaller branches lets you know that it was developed from a larger trunk chop. I would love to see this same display in Fall to see the yellow elm leaves combined with that fantastic blue pot.

I love the display stands for this display. Well chosen and very fitting for the accompanying trees.

The feminine pot is a perfect elegant choice for the pine tree. Flowing rim of the pot with a tapered bottom enhances the movements of the tree without dominating the display.

The Elm has a nontraditional lower branch on the left, but I like it. It really helps to balance the tree and serve as a defining branch.

I’ve been wanting to work with some legitimate indoor bonsai species, and Jade is the #1 indoor bonsai choice and seems to be the exception to all the rules, so I figured why not. I found a planter at Lowe’s that was discounted for being there too long. It had several healthy Portulacaria Afra stems along with a few other succulents, so I went for it. This is also known as Elephant Bush, Dwarf Jade, or even Crassula Ovata Compacta. I’ll use them interchangeably so you can get used to it, or maybe so I can confuse you… The planter had glued down rocks that make me angry. Angry + Lack of patience = Broken box. The dwarf jades made it out just fine don’t worry. 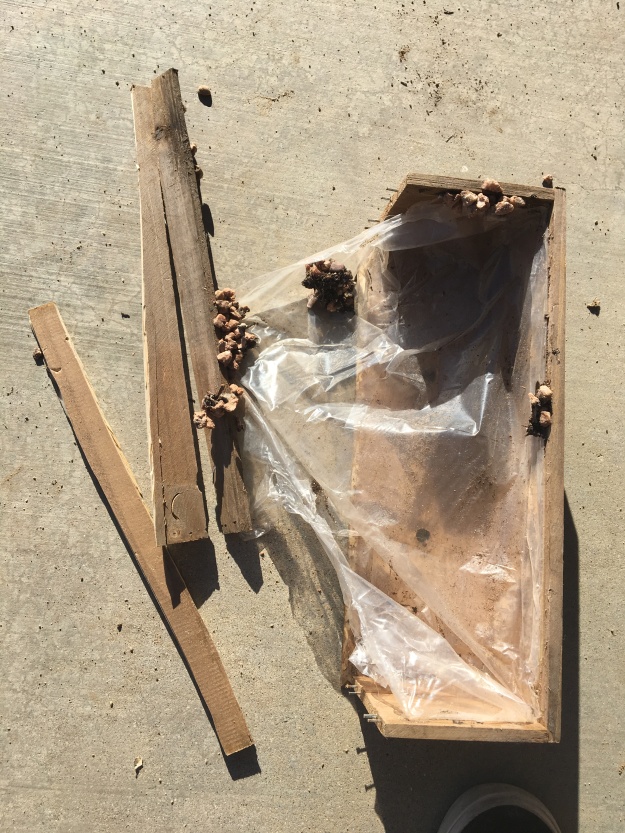 I made the mistake of not having an abundance of soil mixed and ready, tons of pots to choose from, and did it in the middle of the day when I would be asked to do familial duties. I highly suggest when repotting that you avoid these oversights.

Not being prepared kept me from initially pruning and creating more cuttings and planting additional plants in their own pots. I plan to do so later once I restock my soil and pot supplies. Dwarf jade is notoriously easy to propagate which I’ll go into later.

I used my handy little double-sided knitting needle to dislodge the soil from the root mass. I wanted to replace the soil with some well draining soil. Dwarf jades are mostly killed from over watering. Elephant bushes can take around 10 – 20 days without water in the growing seasons, and up to a month in the colder Winter. When watering be sure to water thoroughly, since succulents like a thorough watering infrequently.

After separating all of the plants I ended with a few containers seen in the gallery below. I used some equal parts lava, pumice, and Turface with some bark fines for soil.

I found these wonderful Jades sitting on the discount rack for $3 at Lowe’s. I’ve always loved the way the thick trunks on these look. One wonderful characteristic of Jades is that they rarely need watering. They make great desktop plants for offices and easily survive the occasional week off or weekend without any care.

Heres the Jade before I destroyed the root mass.

I was a little surprised to see how small the actual root balls of each individual trunk was. I expected tons of roots, but there were very few. This was going to call for some smaller pots than I previously thought I’d need. 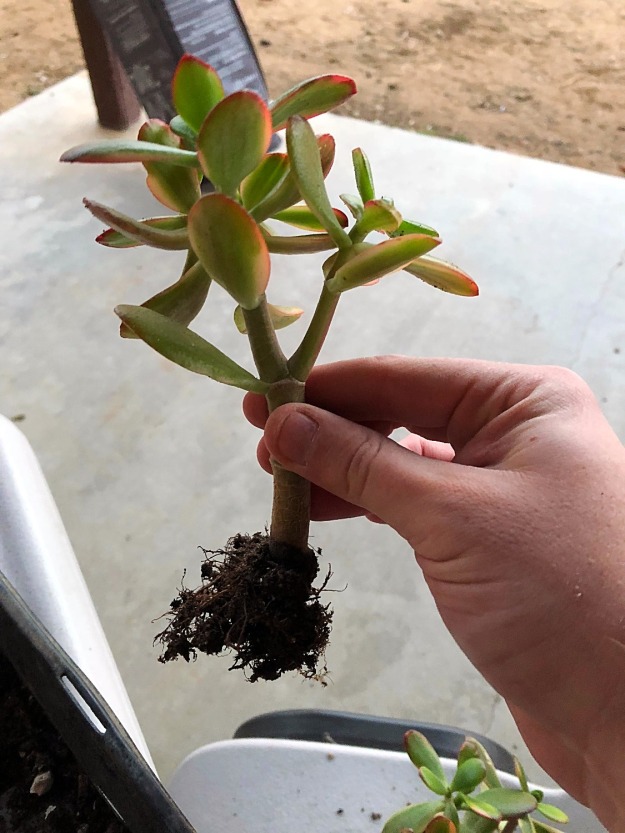 One of them after the repot. 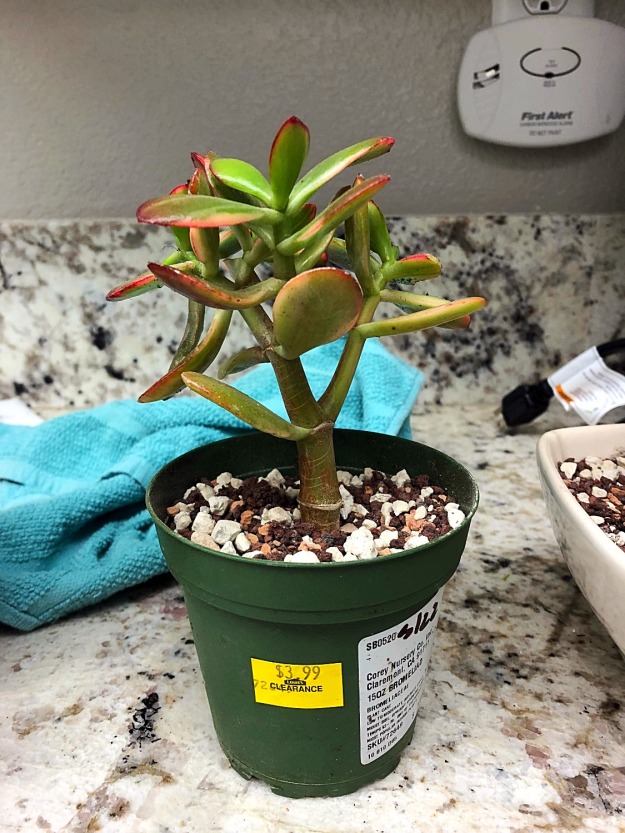 The first plant potted up with its twin trunk. 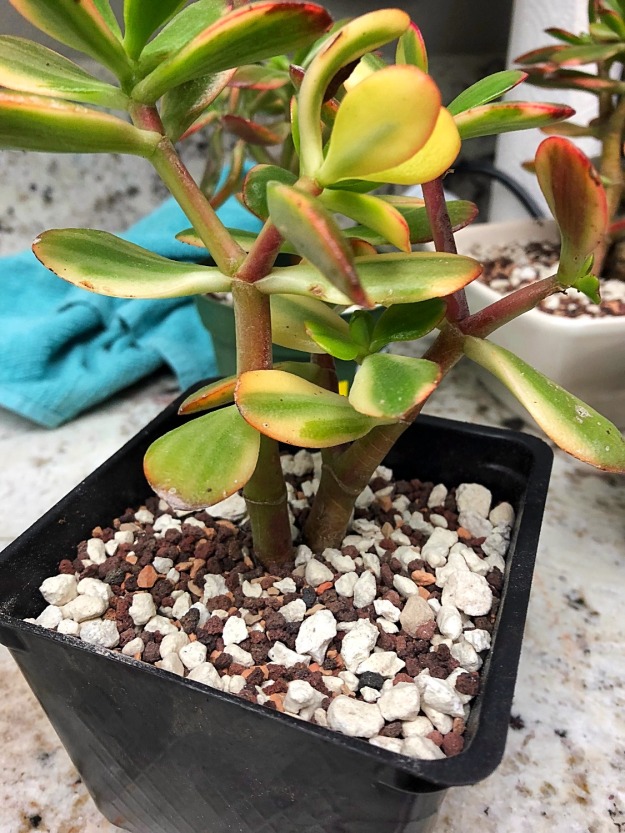 As far as propagation, Jades are a bit different from other plants. Both Jade and Dwarf Jade are succulents and they propagate differently than deciduous trees. You have to let them dry out for about a week once you cut them (or pull a leaf), then there are two ways you could follow that up. You can either leave it in a glass of water to grow roots and then transplant them, or you can leave them on top of dry soil and wait for roots to emerge looking for water. Once you see roots and/or new growth you can water it.

The photo below shows leaves that had dropped and rested on the surface of the soil. Roots then emerged as shown.

I took the two leaves that had fallen and a cutting that was a casualty and put them into some of the leftover soil from the repot. I waited to add the cutting and watered the two leaves immediately since they both had roots already emerging. 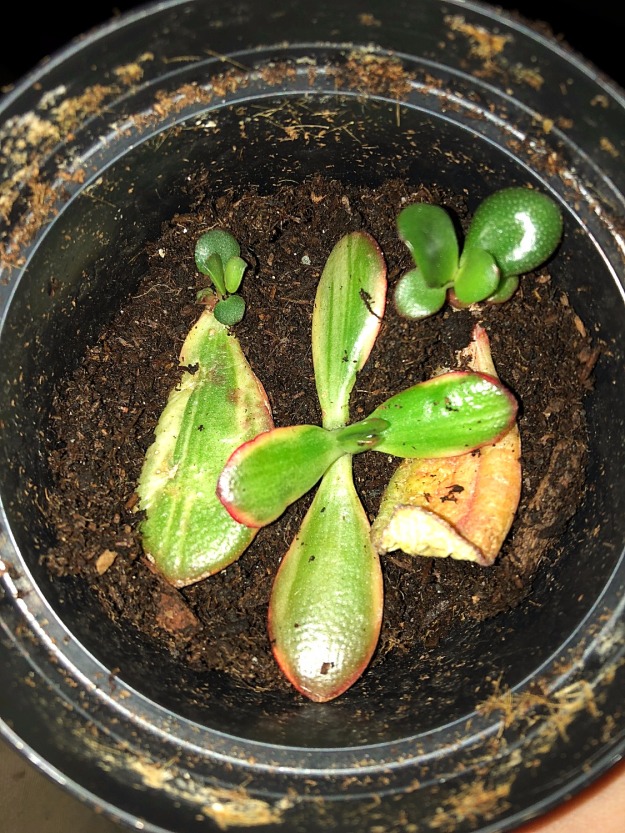 I hear these are slow growers, so we’ll see how long a good updated post with photos takes.

I found two of these Cotoneaster Apiculatis (Tom’s Thumb) for $3 each in the discount rack at Lowe’s. Couldn’t pass these up seeing that I don’t currently have this species of Cotoneaster, and they both had interesting enough trunk possibilities that it was well worth the $3.

As you can see there is a lot going on here. Branches everywhere and roots all over. 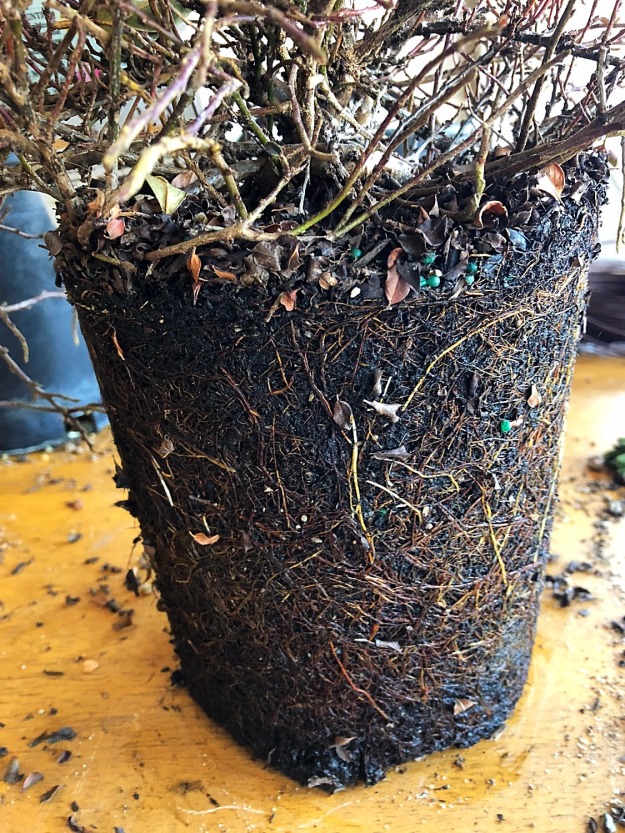 As I started through this I basically ended up cutting the rootball in half vertically. I separated a ground-layered section and then combed out the remaining roots for the main trunk. 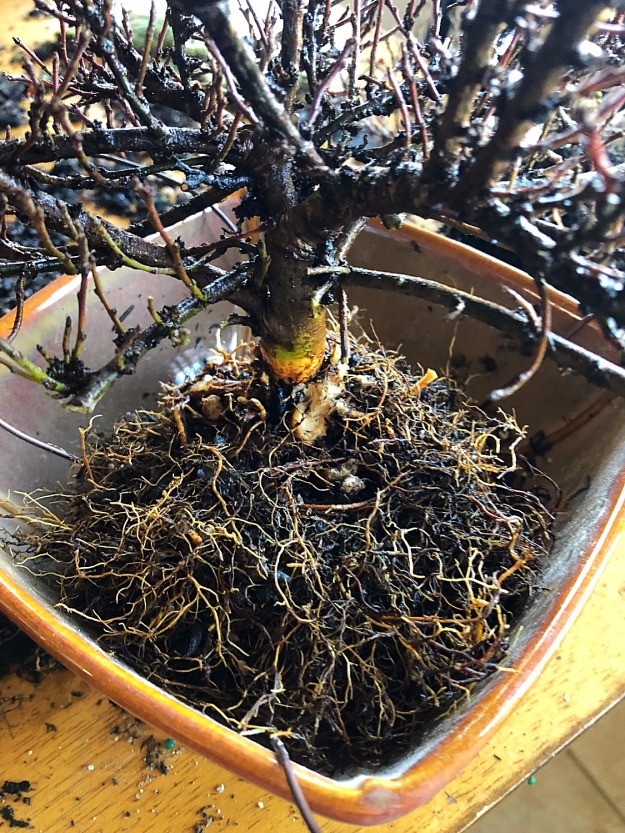 This is the portion of the tree that had been naturally ground-layered. I was able to cut a majority of the root system off in hopes that this can become established in its new pot. 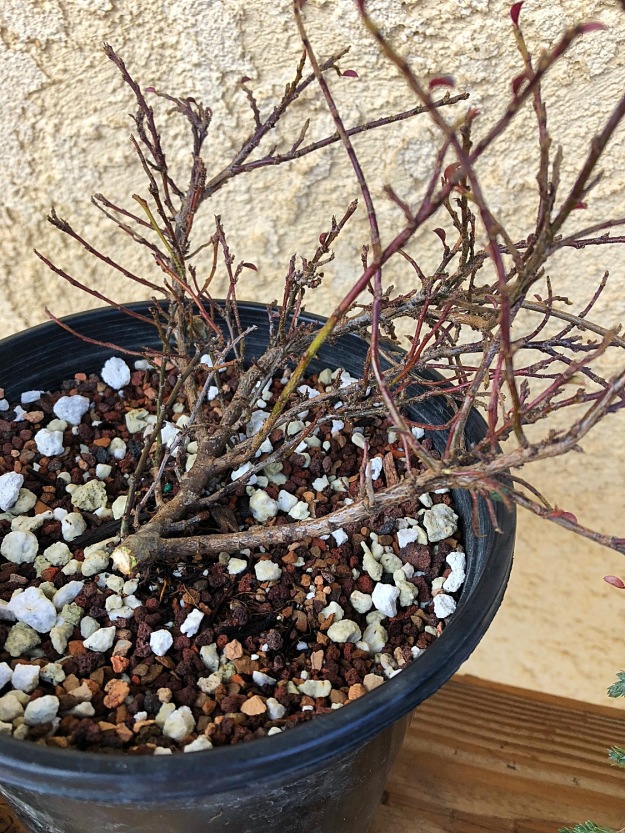 There was another large trunk that I to cut off due to it being too close to the main trunk. See bottom left of the trunk.

This is the front with finger for scale.

Full view of the front in my funky bowl gone bonsai pot.

A closer look at the options I have near the trunk. 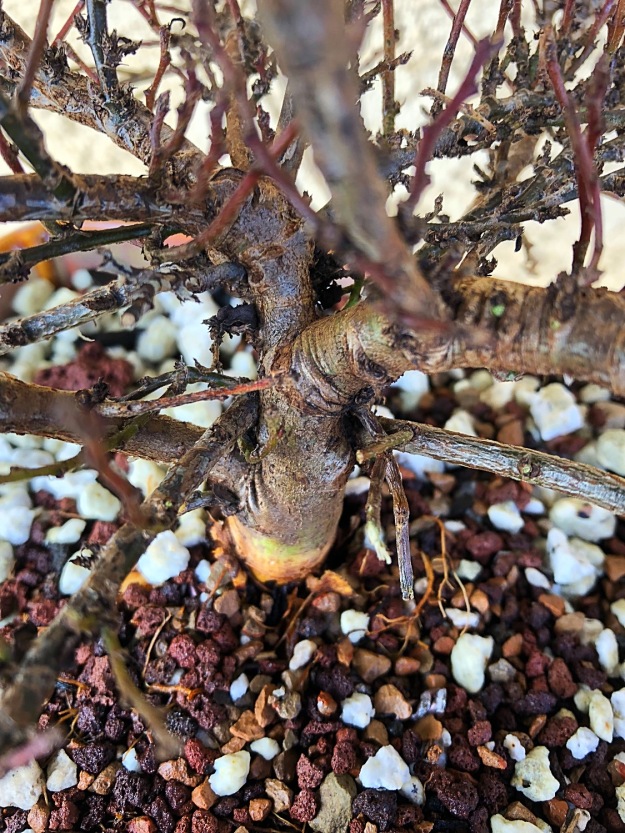 For now this is what I’m thinking about. I’m going to be taking several cuttings from the other side once late Spring comes around. I’ll let it grow out and re-establish its root system without doing too much work on the top. Spring growth brings foliage, and foliage stimulates root growth. The roots will open as many buds as it can handle, and the rest will slowly take care of itself. Yay for plant physiology! 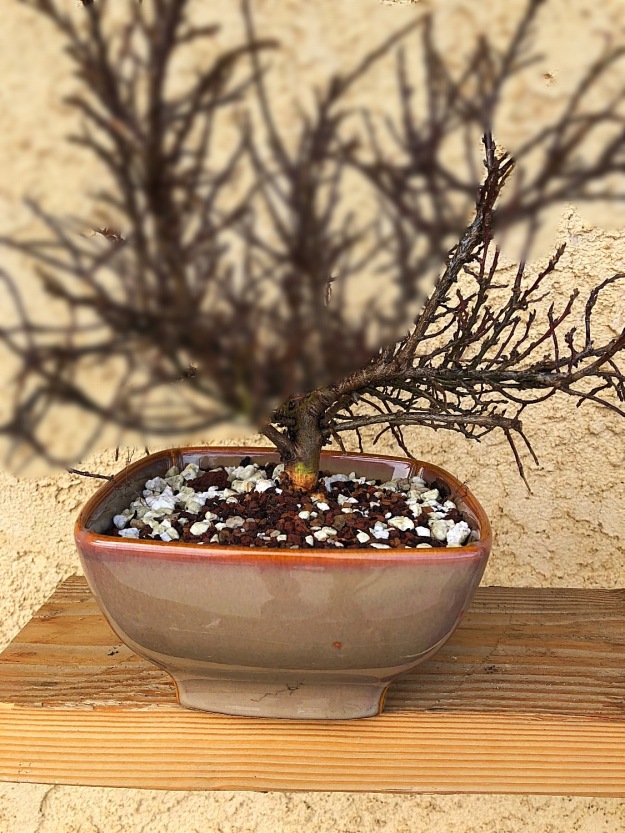 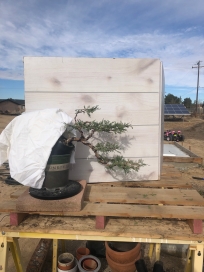 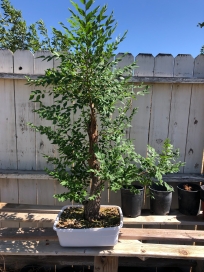